Directions (Q. 5-6):Study the following information and answer the following questions:
According to a recent survey conducted by the Associated Chambers of Commerce and Industry of India (ASSOCHAM), the biggest hurdle faced by parents who are applying to primary schools is donation, which ranges from  `3 lac to  `8 lac. The average budget of the parent has also increased from  `1 lac in 2010 to  `3 lac in 2013 (excluding the donation) on items and activities
integral to the school curriculum, such as fees, transport, books, uniforms, stationery, building fund, educational trips, tuitions and extracurricular activities, not to mention the fat amount spent on prospectuses. The survey showed that parents invest an average of 75% of their income in their children's education. The survey reveals that parents complain about the demand for 'money without receipt' by almost all private schools in Delhi and NCR.
A. Government education department go blindfolded even though these cases are brought under their notice.
B. Admissions into entry-level classes of private-unaided schools has been inordinately stressful.
C. If this situation goes unchecked only upper class people can avail education for their kids.
D. Every citizen in India has right for education and forcing parents to give donation to secure a seat is a gross violation of human rights.
E. Government should form an Early Childhood Commission like other countries.
F. Pre-school education should be covered under RTE.

Directions (Q. 7-8):Study the following information and answer the following questions: There's no denying the manner of arrest of India's Deputy Consul General in New York has been downright humiliating. Reportedly, Devyani - accused of lying on a visa application for her maid – was handcuffed, strip-searched, subjected to a DNA swab and treated like a common criminal before being released on bail. Such harsh treatment is in clear violation of the courtesies extended to a consular official.

A. Indian Government must mount a calibrated and proportionate response, designed to convey its outrage.

B. The US should apologise for the treatment meted out to an Indian consular official.
C. A strong issue-based response should suffice in expressing Indian government displeasure.
D. All import export relations with US should be stop.
E. All US diplomats should be treated same way.
F. The US authorities are doing their jobs.

Directions (Q. 9-10):Study the following information and answer the following questions: Australia's dramatic turnaround to dominate England and win back the Ashes just months after a 0-3 series defeat to their traditional rivals has largely been attributed to their coach and hard work. Australia faltered for pretty much the first time in the series trying to close the deal, but rallied to blow away the last vestiges of English resistance and reclaim the Ashes with a third emphatic Test victory on December. Just three months after England wrapped up a third successive Ashes series triumph by a similarly dominant 3-0 margin back home.
A.Australians are just fed up with losing.
B. Australian team is well prepared for opposition this time.
C. England players are out of form.
D. Australian coach made them work hard and maximise their potential.
E. English player should practice more and stick to their strength. 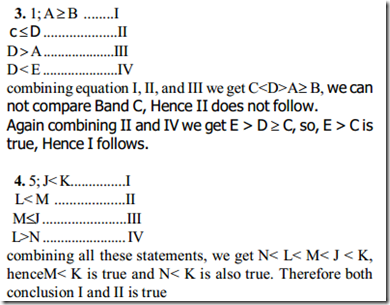 5. 4; In order to regulate all this related issues Government should form a Early Childhood Commission and to stop this donation menace Preschool education should be covered under  RTE.

6. 3; If the situation still persist  many middle-income group parents  can’t  apply  because  of  the  expensive  admission procedure.

7.  5;  Both options A and C are the right choice for  the Indian government.

9. 2;  Both hard work and preparation may be the key factor for Australia’s victory.

10. 5; Good preparation and working on their potential may be suitable course of action for England’s team