Give answer 4) if the data even in both the statements I and II together are not sufficient to answer the question.

Give answer 5) if the data in both the statements I and II together are necessary to answer the question.

1. How is Omprakash related to Rajesh?

I. Omprakash is the father-in-law of Riya, who is the brother's wife of Rajesh's only uncle.

II. Seema, the only daughter of Omprakash's wife Sanjana's only uncle, is the wife of Rajesh.

2. If Anuranks 14th from the top in her class. What is her rank from the bottom?

I. Tanu ranks 18th from the top in the same class and 34th from the bottom.

II. Manu ranks two more than Anu in a class of 50 students.

3. On which day is Sameer's interview scheduled?

I. Tony correctly remembers that it is before Friday but after Tuesday.

II. Tinku correctly remembers that it is before Thursday but after Monday.

4. Which direction is Prem facing?

5. Five friends are sitting around a circular table facing the centre. Who is sitting immediately to the left of Kunal?

I. Kunal is sitting third to the left of Anil, who sits between Surender and Gajendra.

II. Surender is sitting to the left of Anil and only oneperson is sitting between Kunal and Surender.

Direction (Q. 6 - 10): In each of the questions given below which one of the five Answer Figures on the right should come after the Problem Figures on the left, if the sequence were continued? 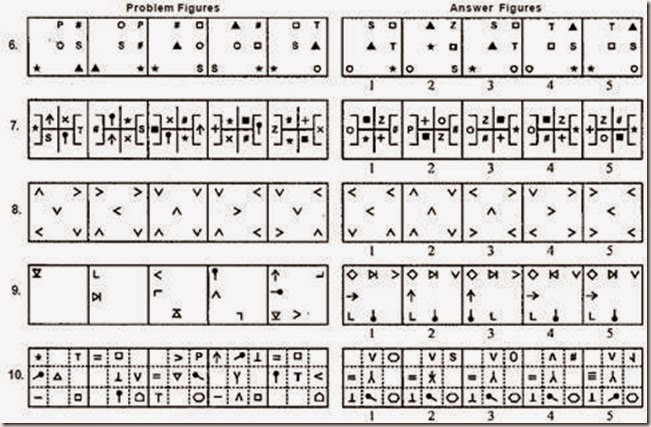 1. 3; From I Riya is the mother of Rajesh. So, Omprakash is the grandfather of Rejesh. From II Seema is the cousin of Sanjana. So, their husbands, Omprakash and Rajesh, are brothers-in-law.

3. 5; From I Possible days are Wednesday and Thursday.

From II Possible days are Tuesday and Wednesday. Combining I and II: The day of interview is Wednesday.

From II. Prem is facing East.

Hence I alone is not sufficient.

Combining I and II

Hence Gajendra sits on the immediate left of Kunal.

8. 1; The central and the two. Corner elements rotates by 90o CW, while the other two remains unchanged. This rotation moves one side CW.