Today i.e 28 April 2013 (28-04-2013) SBI (State bank Of India) Conducted Written Exam All over India In several Venues for Post of Probationary Officer (SBI PO exam ) vacancies of 1544. we are providing some questions for asked General Awareness test. one of the best section for scoring high in the test. 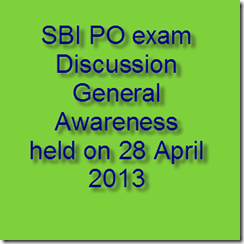 1. Playing to win book written by
2. Joystick is used in
3. Central govt provided SBI
4. The amount a bank have to keep at RBI is
5. Small and medium savings concerned with
6. Work after sale is
7. Memory, control unit n ............... An integral part of cpu
8. Person awarded in Bangladesh Md. Yunus due to
9. The rate below that no bank can provide loan is called
10. Saving account rates decided by
11. Bombay stock exchange is now known as
12. IT company that recently spreaded in other countries
13. One of the condition of opening branch for licensing how much in rural areas?
14. The currency of European union is
15. Word related with cricket
16. A time period for which not interest is charged called
17. In term CPU, C means for
18. Which of the following is not related to memory?
19. USP Means
20. DSA work's quality depends on
21. Target market of debit card is
22. The character of a good sales person is
23. Mulya yojit seva means
24. Data backup helps in
25. Captain of Australia team played in march

Descriptive paper (based on memory )

(1) For his sibling for starting his competitive exam.

(2) For acceptance of job on which applied for assistant manager.

(3) On behalf of department for working in late hours and not appreciated by management members.

Write a paragraph for following topic :

(1) The importance of investment

(2) The importance of saving energy

(3) The role of small scale industries in economy

Share your attempts all over questions( All sections ) and have asked questions share here.  what is Question paper level and What is the expected cut off your guessing let me in this blog

Update : We will add all question as soon as . stay with us